Robert Wade is my idol.  If you don’t know who Robert Wade is, then let me tell you.  He is a well-known Australian artist, who has gained worldwide recognition for his mastery of watercolor.  Robert has received numerous overseas awards, exhibited with many international watercolor societies, and he has his work represented around the world in public, corporate and private collections.  He has received numerous commissions, has contributed regularly to art magazines, and in the past conducted regular art trips around the world and within Australia.  And if you didn’t already know, he is also well-known for his golf course paintings!  Here’s a link to Robert’s CV which will tell you more:  https://www.watercolorweb.com/wade/wadecv.html

I first met Robert Wade in 2011 when he came over to Western Australia with Terry and Lorraine Lewitska to conduct a series of workshops in Augusta and Margaret River.  During the workshops I learned some wonderful watercolor techniques, including washes, tone, colour mixing, and composition.  I loved being in Robert’s company as his passion for watercolour was infectious and I realised then, as I do now, that that is how I want to come across to my own students.  So I guess Robert has become my role model for teaching watercolor.

Just last weekend I was in Melbourne and was fortunate enough to be able to visit Robert in his studio.  I was so blessed to be able to see paintings in his own private collection, and to see his actual studio where he is always surrounded by paints, brushes, paper, art books, and music.  I would say that to date, this has been the highlight of my painting career!  To top it off, Bob was kind enough to let me buy one of his paintings and out of the choices he had available, I picked one that resonated with me because of the colours and semi-abstract feel to it.  It’s an aerial view of a waterhole near Alice Springs in the Northern Territory and by coincidence this is also the same painting that you can see being demonstrated on his DVD – “Wade’s Watercolour Solutions” (number 4 in his series of watercolor films).  It’s quite exciting knowing that I now have the original!  Here’s a link to s snippet of what’s on that DVD –  https://www.youtube.com/watch?v=K5KUfNh6WgY.

Thank you, Bob, for making enlightening my watercolour world! 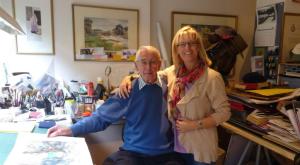